It's incredibly easy to permanently damage your hearing

Hearing loss is now the third most common chronic health condition in the US, just after diabetes and cancer. This is frustrating because hearing loss is both irreparable and preventable.

When I was a teenager, I knew that wearing sunscreen could help stave off skin cancer, that I shouldn’t smoke if I wanted to avoid lung cancer, and that condoms can prevent many sexually transmitted diseases.

No one warned me, however, that loud sounds — one screeching singer at a concert, or a construction drill — could permanently wreck my hearing. I also didn’t notice how ubiquitous the deafening din in our environment is.

Lately, though, I’ve been using decibel readers to track noise levels — in loud restaurants, on the street, in exercise classes and clothing stores — as part of a reporting project on noise. And I’ve found sound levels above 85 decibels, which are harmful to the ears, many places I go.

Let’s start at the beginning: How does all the noise erode our hearing in the first place? To grasp that, we need to walk through the fascinating machinery of the ear.

We’re born with about 16,000 little hair cells in our ears that act as sound detectors. When sound waves pass into our ears, the hair cells send a signal to the brain, and then our brain decodes the sound, whether it comes from a barking dog or a truck that’s passing by.

But “the brain’s interpretation is only as good as the signal it receives from the ear,” said Ellen Pfeffer Lafargue, an audiologist with the Center for Hearing and Communication in New York. “When the [hair cells in the] ear have been damaged, the sound that the brain gets is distorted or the ear can’t detect sound.”

Lafargue often uses the analogy of a grassy meadow to help her patients understand how noise degrades hearing. “Imagine a field, walking through the grass. When you walk through one time and look back, you can’t tell anybody walked on the grass.” The blades recover and bounce up again. But “if you’ve walked through it enough times, it becomes a permanent path.”

The same thing happens with the ears’ hair cells. Like grass responding to a person’s feet, the hair cells bend when they’re exposed to loud sounds. They can bounce back during a recovery period — but when loud sounds have passed through the ears enough times, or at a high enough intensity, the hair cells get permanently destroyed. Along with them goes our ability to detect sound and send noise signals to the brain.

One symptom of noise-induced hearing loss is tinnitus, or ringing in your ears. The condition can be extremely bothersome — and while there are treatments, there’s currently no cure. (You can listen to sample tinnitus sounds here.) 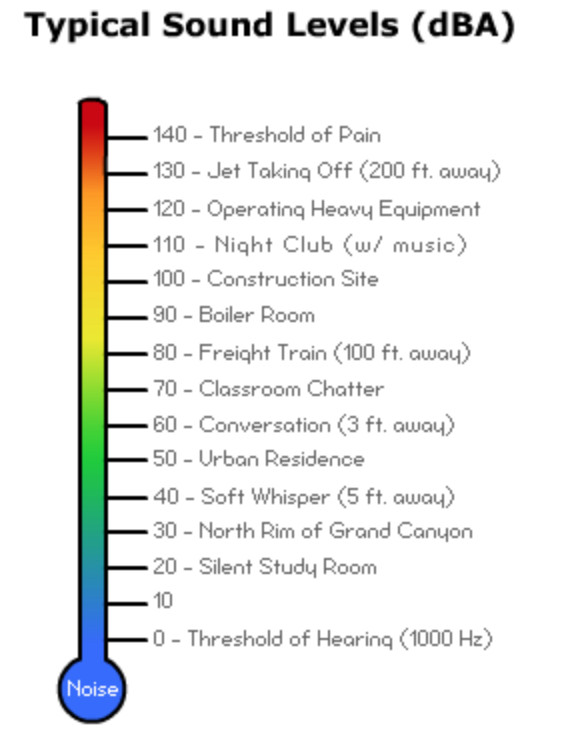 Sound is made by waves of air pressure, and decibels are the unit by which sound intensity is measured. They fall on a logarithmic, or nonlinear, scale, meaning the marks on the scale are based on orders of magnitude. So a noise level of 95 decibels is much louder than even 90 decibels, and so on.

The official government stance on safe noise levels comes from the National Institute for Occupational Safety and Health, which sets the standard for noise at work. It recommends limits of 85 decibels — a bit more than the loudness of a freight train 100 feet away — for eight hours a day, and that people exposed to anything louder use hearing protection. That’s because chronic noise exposures above this threshold have been shown to cause hearing loss over time.

But 85 decibels is not necessarily where hearing loss begins. Back in 1974, the Environmental Protection Agency suggested keeping noise levels around 70 decibels to optimally prevent noise-induced hearing loss. And the National Institutes of Health today suggests that sounds above 75 decibels can harm a person’s ability to hear.

What’s more, while being around loud sounds every day can certainly diminish your hearing over time, you don’t need sustained exposure to get permanent damage. A single pop of thundering noise — like a gunshot or an explosion greater than 120 decibels — is enough to do permanent damage. So exposure to sounds at that level takes even less time to diminish hearing.

And what about listening to music or podcasts all the time on earbuds, the ubiquitous symbol of millennials? The only thing that’s harmful about earbuds when it comes to hearing loss is the sound levels at which we use them. Cranked to their top volume, smartphones can carry sounds above 100 decibels, which even for 15 minutes can damage your hearing, the WHOhas warned. (You may want to consider setting a maximum volume on your iPhone.) So using earbuds in and of themselves isn’t necessarily harmful, unless you’re turning up the volume all the time.

Along with noise exposure, age is a major predictor of a person’s ability to hear. Our hearing declines with every passing decade. Just look at the steep increase in hearing loss in this chart from the Centers for Disease Control and Prevention: 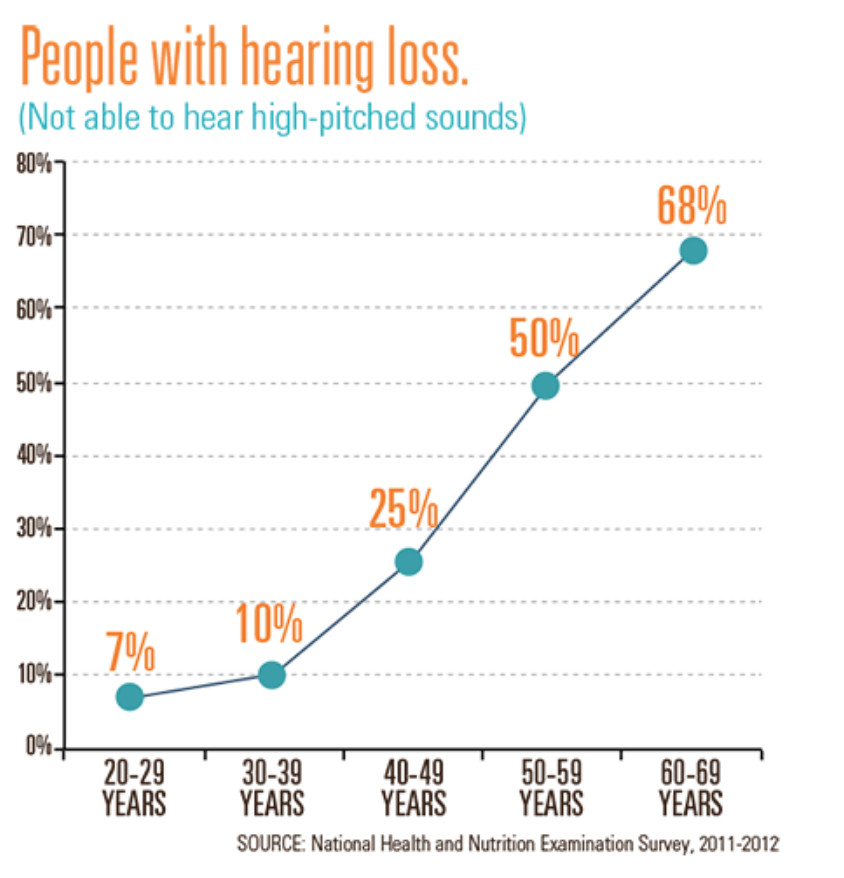 The prevalence of hearing loss increases from 7 percent among adults ages 20 to 29 to 68 percent among those 60 to 69, according to the CDC. And with untreated hearing loss, the agency warns, can come declines in “social, psychological, and cognitive functioning.” (Researchers have also long known that exposure to noise is associated with harmful sleep disturbances, endocrine effects, and an increased risk of diabetes and heart disease.)

But it’s difficult to disentangle the causes of age-related hearing loss, or “presbycusis,” from the causes of noise-induced hearing loss. That’s because presbycusis is most commonly caused by gradual changes in the inner ear, including the wear and tear to the hair cells brought on by noise.

There is some good news on this front, however: Researchers recently looked at whether the aging of the population was associated with an uptick in hearing loss cases. And they determined that among adults ages 20 to 69, the prevalence of hearing loss actually dropped between 1999 and 2004, from 16 percent to 14 percent. They postulated a few reasons:

Explanations for this trend are speculative, but could include reduction in exposure to occupational noise (fewer manufacturing jobs, more use of hearing protection devices), less smoking, and better management of other cardiovascular risk factors, such as hypertension and diabetes. Less plausible explanations, especially for beneficial changes in the most recent decade, might include fewer ear infections that are managed better as well as improved diet.

So even if many domains of the urban environment seem to be getting louder, our ears may be protected by these other means. The progress is not evenly spread throughout society. Noise pollution tends to be worse in communities of color — perhaps another driver of the black-white health gap in America.

To avoid noise-induced hearing loss, as with many aspects of health, a little common sense can go a long way. As Nancy Nadler, the deputy executive director at the Center for Hearing and Communication, told me, “People need to use common sense. If it sounds too loud, it probably is. You need to understand once you damage your hearing from noise, you can’t do anything to get your hearing back.”